Thank you to the Yachats Academy of Arts and Sciences for allowing me to share our project with their members. and thanks to some quick responding participants who’d come to my talk about marine debris, a mass of net and rope were removed from the beach at Yachats.

Thursday, October 15th, I gave a talk and shared the video  ” It’s Everybody’s Ocean”, directed by Atsuko Quirk.  Our goal and the goal of the Oregon Marine Debris Team is to make everyone aware of the amount and types of debris washing up on all of our shorelines.

Friday, October 16th, a little after 10am I received the first call from Zach, who said he’d been to the talk the night before and was now on the beach with a mass of netting and rope.

I left a message for OPRD and in the meantime another call came in from John informing me that he’d also been to my talk and wanted to report a large mass of netting and rope on the beach.  It is a priority to get these masses of rope off the beach before they become even partially buried in the sand.  Once that happens, it usually takes a pickup or heavier equipment to get it up out of the sand.

After letting John know that I would be heading there within the hour, I spoke with Bea at OPRD to inform her of the rogue net and rope.  By the time Mike and I got there, Zach, Bob, John and Mark were starting to pull the rope off the beach. 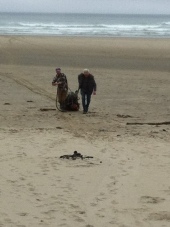 Mike helped with the removal of the large pieces and I gathered the scraps.

I contacted Bea and sent photos showing the location of the rope mass to be picked up by OPRD.

Thank you to these guys for some great teamwork.

If you find something on the beach that needs immediate attention please call me at 541.270.0027

This entry was posted in Uncategorized. Bookmark the permalink.