Thanks to the quick thinking of long-time (since 1995) CoastWatch mile adopter Dale Lee, we were able to avoid a disaster like the one on Light House Beach, last year.  Dale has a secluded pocket beach south of Humbug Mountain that catches all kinds of interesting items.  Last year it was a massive pink float with a massive pink barnacle, Megabalanus Rosa. Drs. Chapman and Miller were excited about that.

Dale initially contacted me on March 28,

“It has few to zero sea creatures attached to it and moss growing on the sides, plus little damage so I think it is somewhat local, and was probably lost from fresh water. Three sections are approximately 4×8 each. Bottoms are Fiberglas filled with low grade foam. NOT tsunami debris, although there were a few timbers and other sundry Japanese items today. I’m pretty busy for a few days but will try to get a mile report out later in the week.”

The beach ranger was contacted and asked for verification of dock location. He felt this was out of his realm of expertise. 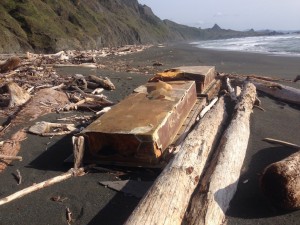 We then contacted the members of our OMDTeam which included State Parks, Surfrider, Washed Ashore, and SOLVE.  Shirley Stentz of State Parks and located there in Curry County, contacted the Corrections Department and within a few days plans were set and the dock was removed.  The series of attached photos tell the story.

Yep, it is at the other end 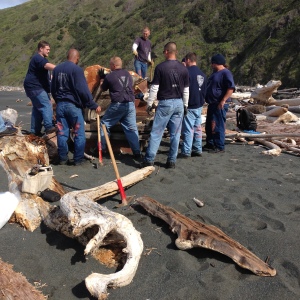 Diving into the dismantle. 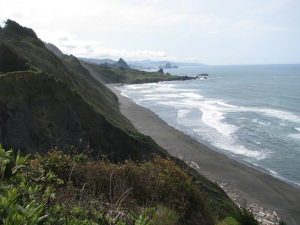 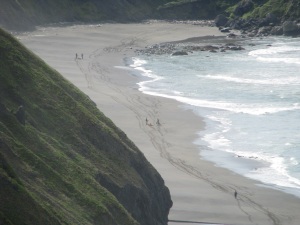 The long walk back to the trail head. 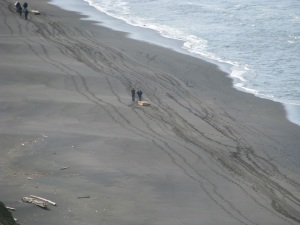 Evidence of many trips 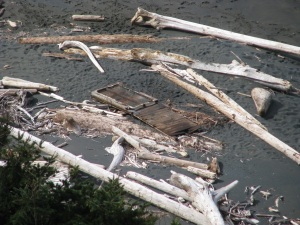 Our many, many thanks go to Oregon Parks and Rec Department and the Oregon Department of Corrections for the able bodies and labor involved.

This entry was posted in Uncategorized. Bookmark the permalink.